One of Willis' coworkers invited us over to harvest their hops.  We will harvest ours later this week and Willis will probably brew this weekend.
Cascade, Nugget, Mt. Hood, Chinook, Kent Golden.

Tonight's dinner menu is tacos! With tomatoes, peppers, onion, and garlic - all from our summer garden.

Today, Willis pickled some of the never-ending green beans from the garden.
Posted by ciara. at 6:25 PM No comments:

Our good friend, Chris, was recently in town to fill his stomach with Voodoo doughnuts, ride bikes through the west hills, and backpack up the mountain.  Originally, we had planned on going to a place we had been before which included a short hike in to set up camp near a lake and then continue on for a long day hike.  However, the day of, we decided on something a little more challenging and chose to go to McNeil Point instead (found in 100 Hikes in Northwest Oregon & Southwest Washington, by William Sullivan).
We started out at the Top Spur trail head.  I have never seen so many cars at a trail head before and was super nervous getting out of the car.  Our dogs don't do well when the trails are swarming with dogs and I was unsure about finding a good place to set up camp.  Fortunately, most of the folks were day hikers, few dogs, and there are many trail options that the whole hike up didn't seem too crowded.  The beginning of the hike is through a forested area with tons of huckleberry bushes.  The trail eventually curves around Bald Mountain and opens up with a beautiful view of Mt. Hood and tons of wildflowers, where we ate lunch.

The trail then re-enters the forest until it opens up again to a meadow with a couple ponds.  We looked around this area, to set up camp, but didn't find any place that satisfied us and continued on.  I am so glad we did.
After the ponds, the trail continues to climb.  There were a few small snow fields that covered the trail, but nothing too treacherous.  At this point, due to the amazing weather, we had great views of Mt. St. Helens, Mt. Rainier, and Mt. Adams.  We followed the ridge up through Cairn Basin, looking for campsites along the way, until we found the perfect one.

About 5 miles in, we found two campsites with views of all 4 peaks and overlooking a valley of hills.  I stayed at camp with Bandit, while Willis, Chris, and Banjo continued on for another half mile or so to the shelter at McNeil Point.
While they were gone, the clouds started rolling over.  Fortunately, the rolled right through and by the time they returned, we were well above the clouds for the rest of the evening, playing cards, eating s'mores, and enjoying the sunset over the valley.

The hike out was quick, but still filled with amazing views.

We recently purchased a shiitake kit from Fungi Perfecti. I figured it'd be a great way to fuel my mushroom obsession until the fall chanterelle season starts. 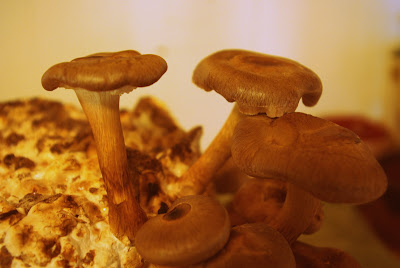 The kit is pretty easy to take care of, and we've already had a good fruiting (around half a pound). It should last about 16 weeks and fruit every couple of weeks before it's done fruiting, but I'm planning on getting a few more kits before that. I'm looking forward to a steady supply of mushrooms and transforming a portion of our house into a micro fungi farm!
Posted by willis. at 9:00 PM 1 comment:

HAPPY BIRTHDAY TEAGAN!!!!! MY FAVORITEST NIECE EVER.
One whole year:  already been to two continents, eight countries, and five states.
What will year 2.0 bring?  Disney World?!

http://teagandoyle.com/
Posted by ciara. at 9:15 AM No comments:

Get Updates By Email: